A predominantly wet and dry heathland habitat with areas of woodland, acid grassland and ponds.
Brentmoor Heath occupies the north eastern corner of a very extensive block of lowland heath that includes the MoD lands: Colony Bog, Pirbright and Bisley Ranges, and the training areas of West End Common.
The reserve is predominantly wet and dry heath habitats, with areas of woodland, acid grassland and ponds. In the dry heath, dominated by ling, there is scattered gorse – a species typical of the lowland heaths of north-west Surrey.
Areas of open ground in the wet heath support the insectivorous sundews, cotton-grass and white beak sedge in an otherwise characteristic community of cross-leaved heath, purple moor grass and deer grass. Stands of mature Scots pine and an area of young oak and birch add to the diversity of habitats present on the reserve.
Management is ongoing to prevent trees from predominating in the areas of open heath and shading out the heathland plants. Small clumps of trees and scrub and wooded fringes are, however, valuable and should encourage heathland birds such as nightjar, which is common in the area.

Our first Weekday Walk was well attended and was led by Mary Adler MBE, a Trustee of Surrey Wildlife Trust.  It was gentle, largely on level ground and lasting about two hours.
Mary was so informative & could tell each bird by its call, we learnt about the birds, insects & plants as well as anecdotes from the area & how areas were named. There were even Four Bronze Age Burial Mounds to admire.  Did you know there are a herd of Red Deer on the Firing Ranges which keep the vegetation in check! 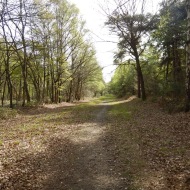 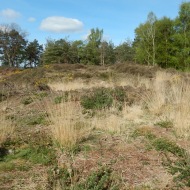 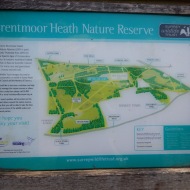